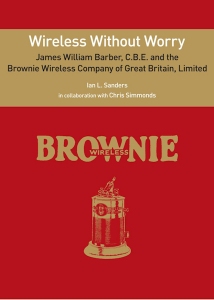 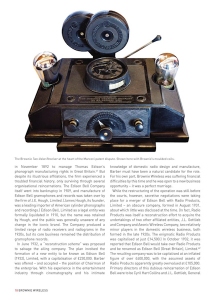 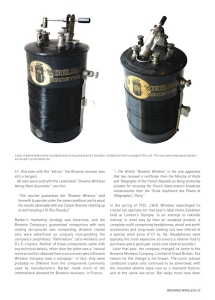 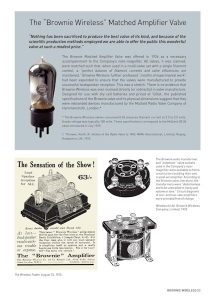 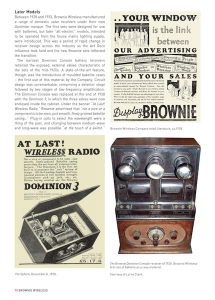 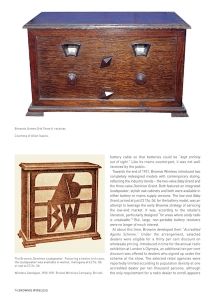 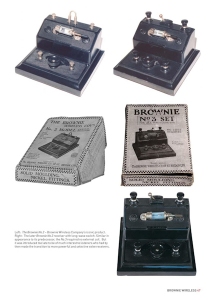 The first Brownie wireless receivers were introduced in early 1923, shortly after the start of broadcasting in Great Britain.  Manufactured by J.W.B. Wireless Supplies, they were crude, low-cost crystal sets catering to the growing number of “listeners-in” looking for an inexpensive way to tune into the British Broadcasting Company’s local transmitting stations which were opening up around the country.  The new enterprise took its name from its founder’s initials – James William Barber, changing to J.W.B. Wireless Company a few months later.  The Brownie Wireless Company was incorporated in 1925, absorbing J.W.B. Wireless and with Barber as Managing Director.

Barber received the C.B.E. for his contribution to cinematography as a propaganda medium during the First World War, and went on to become influential in the developing home cinema industry at the end of hostilities.  In the early 1920s, he turned his attention to the new field of domestic wireless.  Embracing Barber’s commitment to cost efficient manufacturing, Brownie Wireless pioneered the use of moulded receiver enclosures, in contrast to the classic polished mahogany and walnut cabinets then in vogue.  And in a noteworthy patent dispute with the dominant Marconi Company, Brownie Wireless, lead by Barber, succeeded in reducing royalties on radio receivers for the industry as a whole.

Brownie Wireless produced a range of innovative wireless receivers and accessories for the next several years, but in the face of fierce competition, the Company ceased operations in 1933.  For some reason virtually no records of the Company have survived.  An enigmatic figure, about whom little has been written, in addition to his leadership of Brownie Wireless, James Barber served as Chairman of both the British Plastic Moulding Trade Association and Radio Manufacturers Association for several years and was Technical Advisor to the British Cinema Exhibitors’ Association.  He was a forceful advocate for British industry in throughout his career.  Barber’s legacy, in cinematography and radio, has gone largely unrecognised, as has the role of the Brownie Wireless Company in Britain’s early radio industry of the 1920s and 30s.

“This really is a superb book on the Brownie Wireless Company. There has been a lot of careful research done to achieve this standard. The detail that has gone into the book is first class, and that is without all the many wonderful photographs and drawings of some very rare equipment from the 1920s era. A book for the true enthusiast and anyone who is lucky enough to own any of the equipment mentioned. A hardback, and a great read all round. Highly recommended.”

“Like previous books authored by Ian L. Sanders, this is both well-researched and well-written, and can be considered as the ‘primary source’ of information on Barber (a mini-biography), the Brownie Wireless Company and its various products. The book’s presentation is high-quality, being printed on heavy, semi-gloss paper with many colour and black and white illustrations. Excellent photos of models in the Company’s product line, together with newspaper and magazine clips/adverts are used to good effect, and many side-bars containing useful ancillary information, such as screen-grid tubes, are used throughout. A bibliography and index are also provided.

“The fourth in a series of books about wireless entrepreneurs and the relatively obscure, yet important wireless companies they founded in the UK, all of which flourished during the 1920s. These books chronicle the men, the organizations they founded, and the technologies they touched. The subjects of Ian Sanders’ newest book are James William Barber and the two wireless companies that he founded—the J.W.B. Wireless Co, Ltd. and its successor, Brownie Wireless Company, Ltd. Barber was perhaps best known as the man who challenged the Marconi Company for the perceived exorbitant royalties levied on the sale of valve receivers in the 1920s and 1930s.
It is interesting to note that of the four books written by Sanders in this series, the latest book chronicling founder James William Barber, is the only book in which the founder of a UK wireless company was actually born in the UK. Sanders’ first three books featured UK companies with founders that that were born elsewhere: William Stevenson, founder of the General Radio Company, Ltd., was born in Canada; Cyril Frank Elwell, founder of C.F. Elwell, Ltd., was born in Australia; and Sidney George Brown, founder of S.G. Brown, Ltd., was born in the United States. All three immigrated to the UK where they founded their respective UK companies.
Following the format of Sanders’ previous books, the second part of this book describes selected artifacts, advertisements, and company literature produced by both the J.W.B. Wireless Company and the Brownie Wireless Company. There are many high-quality photographs of artifacts in this section along with reproductions of advertisements, brochures, sales information, and other company literature—many of which are in color. Ian Sanders fourth book in this series is up the very high standards set by his previous books. Everything about it is first class.”