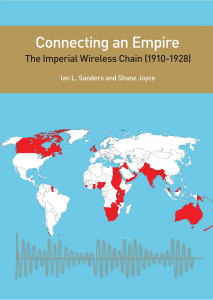 The Imperial Wireless Chain formed part of an international communications network designed to link the British Empire, whose origins dated back to a 1910 proposal first put forward by Marconi’s Wireless Telegraph Company. Also known as the Empire Wireless Chain, the British Government made a provisional agreement in March 1912 with the Marconi Company, specifying completion of the first phase of the scheme within three years of securing a contract. Some eighteen stations distributed throughout the Empire were initially proposed, to provide communication between Britain and Australia, China, South Africa, Canada, and the West Indies. Under the Marconi proposal, the Company was to be licensed to operate the system for a period of at least twenty years, after which the Government would have the option to assume control.

Up until this time, Imperial communications had relied on the cable networks largely owned and operated by the Eastern Telegraph group of companies, which made a comfortable profit from government business. The enlistment of a private entity to provide a wireless alternative to cable, rather than the formation of a state-owned enterprise, met with fierce opposition from both the affected cable companies and from within Parliament. It was the subject of protracted and, at times, contentious debate. In reality, neither of the Government departments who might have undertaken the work, the Post Office and the Admiralty, was willing to accept the task. It was resolved, therefore, to open the project – at least in principle – to bids from private firms. In addition to the Marconi Company, there were really only two other possible contenders at this time – Siemens Brothers (a wholly owned British subsidiary of the German Telefunken Company) and the newly formed Universal Radio Syndicate with its use of the Poulsen arc system. Of these, only the Marconi Company was initially ever seriously considered.

Following an acrimonious dispute involving claims of insider trading in Marconi shares, the Company began work on a station at Leafield, near Oxford in March 1914 and a station in Egypt a little later. Sites were provisionally selected for in East Africa, South Africa and the Straits Settlements (today’s Malaysia.) But following the outbreak of war in November, the Government decided not to go ahead with the scheme and in January 1915 informed the Marconi Company to cease any further work. The Company thereupon intimated that they would initiate legal proceedings against the Government for breach of contract. With the war consuming all attention to wireless telegraphy, the Admiralty, however, established a number of medium power stations at strategic points around the Empire, the Marconi Company being the contractors.

While work on the Imperial chain had been suspended with the onset of war, similar schemes continued to be implemented in France, Germany, Italy and the United States. As a result, at the cessation of hostilities, the British Empire found itself at a distinct disadvantage with respect to its development of long-distance wireless communication. Plans for an Empire wireless scheme were resurrected. After about a year of deliberations and debate, money was eventually allocated by Parliament for the construction of high-power, long wave stations. In the event, the Marconi Company was not awarded the contract for the first two stations to be built in Britain and Egypt. A newly formed enterprise, C.F. Elwell, Limited, a British Company founded by a Stanford-educated Australian engineer, Cyril Frank Elwell was selected. The Marconi Company, however, would ultimately take over the work on the remaining stations. Rapidly evolving developments in long-distance communications, however, would see a transition to directional, short-wave stations, the so-called “beam system,” pioneered by the Marconi Company.