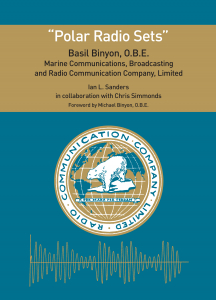 Please call or email for pricing

Radio Communication Company was at the vanguard of wireless technology in the years immediately following the Great War. Its leader, Basil Binyon, was an acknowledged authority in the field, with technical skills honed during the conflict in which he played a key role in developing the Royal Naval Air Service’s in-flight communications. His Company’s ground-breaking work in wireless communications for ships at sea – both military and merchant – was followed by a principal role in the formation of the British Broadcasting Company in 1922, and with contributions to the emerging domestic radio receiver business. An entrepreneur and a fierce champion of the free market, Binyon attempted to provide an industry balance to the near monopoly enjoyed by the Marconi Company. This book chronicles the contribution of Binyon personally, and Radio Communication Company as a pioneer in the field of wireless communications in the early years of the twentieth century.