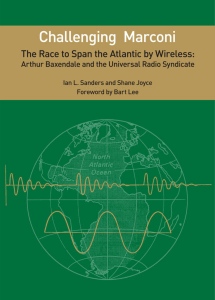 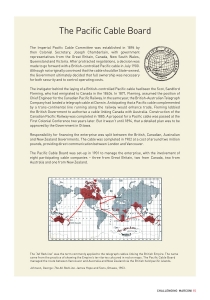 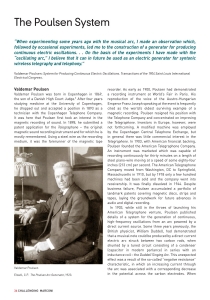 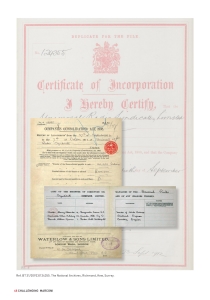 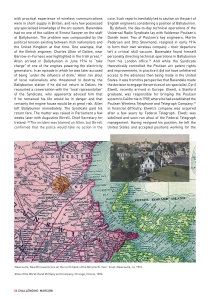 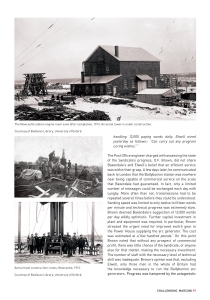 Challenging Marconi − A Bid to Span the Atlantic by Wireless:

The first wireless signal to be received across the Atlantic, the repetitive transmission of the three dots of the letter “S” in Morse code, was sent on December 12, 1901.  The young Italian experimenter, Guglielmo Marconi, had defied the best scientific opinion of the day and demonstrated the feasibility of bridging the Atlantic by wireless.  Academic opinion on both the legitimacy and the practical application of Marconi’s achievement was predictably skeptical. But the first irrefutable telegraphic message was sent just one year later on December 15, 1902, much to the chagrin of the established submarine cable interests who feared competition to their communications monopoly.  A limited commercial public telegram service was inaugurated a few years later in 1907.  Not surprisingly, potential competitors eyed the lucrative prospect to provide an alternative wireless service. None were successful in the short term and, for the next decade, the Marconi Company reigned supreme, dominating the transatlantic airwaves.

Marconi’s pioneering work has been the subject of countless volumes over the years. And while commentators have expressed a wide range of opinions on the originality of his apparatus or his fundamental understanding of the technology, there is general agreement that his achievements shaped the course of radio communications at the turn of the twentieth century.  He received a Nobel Prize in 1909. What have received much less attention, however, are the attempts to compete with Marconi in the decades leading up to the First World War. Notwithstanding that such bids were by and large failures, their story provides a backdrop to the overall history of the development of long-distance wireless communications.  This book sets out to chronicle one such bid to take on the Marconi Company.  The Universal Radio Syndicate was not the first British enterprise to go head-to-head with Marconi, and it wasn’t the last. Neither was it the first British bid to exploit the arc system of generating continuous electro-magnetic waves, developed by the Danish inventor, Valdemar Poulsen, as a means to bridge the Atlantic. But arguably, although also unsuccessful, it came closest to establishing a competitive transatlantic service than any of its predecessors.

The Syndicate’s director, one Arthur Salisbury Baxendale, was a man steeped in the incongruities of Queen Victoria’s British Empire and, as an engineer, absorbed by the challenge it presented for global colonial communications. His life was spent in the furtherance of such communications – by cable telegraphy, telephone, the postal service (where he dabbled in early airmail schemes) and ultimately radio. Part engineer, part entrepreneur, failed novelist and avid economist, above all Baxendale was a committed humanitarian, unsuited to the melee of industrial altercation. His nickname, “Johnny,” by which he was affectionately known, especially during his time in Malaya, likely arose because of his reputation as a “johnny-on-the-spot” – the Good Samaritan given to supporting just causes even when they brought him into conflict with authority. By no means a key figure in the history of radio communications and certainly no match for the legendary wireless pioneers of the early 1900s, for a few years, at least, Arthur Baxendale became embroiled in the struggle to bridge the Atlantic by wireless using Poulsen’s arc.

Relying primarily on original source material available in contemporary journals, reports and scattered documents held in various archives, this work attempts to document both the history of the Universal Radio Syndicate and the personalities behind the venture. For context, the Company’s predecessors in the field form a crucial part of the narrative, culminating, ironically, with the eventual acquisition of the rights to the Poulsen arc technology by the Marconi Company itself.

When we think of crossing the Atlantic with radio signals, the name Guglielmo Marconi is the one that inevitably comes to mind. In the early part of the 20th century however, there were challengers to Marconi’s “crown.” One of these was the Universal Radio Syndicate (URS), formed in 1912, with one Arthur Baxendale at the helm. . . Ian Sanders and Shane Joyce walk the reader through part of the “pre-history” of transatlantic radio communication, including some of the efforts to link the British Empire by means of cable and thereafter by radio. The first section of the book paints a detailed picture of Arthur Baxendale himself – a true “man of the Empire” with a rich and colourful life. The second section provides background to the “Poulsen System” – a means of generating continuous radio waves. The main focus of the last section is the description of early arc station installations, their performance, and the companies and characters that were associated with them focussing on the role of the Universal Radio Syndicate. Rumbling in the background throughout is the influence of the Marconi Company and the UK government at the time. The authors have obviously researched the topics covered by the book in great detail, and the text provides the reader with a thorough appreciation of the complex mix of technical, financial, political and practical issues facing the early pioneers of intercontinental radio communications. The book has been produced to a high standard and is illustrated throughout with useful and informative excerpts from documents and illustrations which help bring this somewhat obscure story to life. Sidebar techniques are used to good effect to provide additional details to supplement the main text.

This most interesting book documents the Marconi Company’s monopoly of wireless by spark transmission and how the later Danish developed Poulsen Arc method was recognised as being more efficient, tuneable, stable and less susceptible to interference, making it a serious threat to the established Marconi system. The book chronicles the life of Arthur Baxendale who, seeing the future world would be dominated by wireless, established the “Universal Radio Syndicate” in 1912. The short life of the Syndicate is detailed clearly and the relationship with the Marconi Company and Government explained. . . There is much to the fascination of this publication, with many rare photographs and diagrams. This is a beautifully produced publication and a thoroughly good read.

Ian Sanders is at it again, this time with coauthor Shane Joyce from Clifton, Ireland, in the publication of their new book entitled Challenging Marconi. This is the fifth book in a series of sagas dating back to 2012 about little-known radio pioneers and the British companies they founded or operated in the early 1900s. This volume follows a format similar to its four predecessor books. It is thoroughly researched, well written, and lavishly sprinkled with rarely seen images—exactly what you would expect from these experienced authors and researchers. . . The central figure of this saga is one Arthur Salisbury Baxendale, not exactly a household name, even in quarters occupied by experienced radio historians. The same can be said for the company founded under his leadership, which was registered as a private company in 1912, under the name Universal Radio Syndicate. Baxendale anticipated a disruption in the cable telegraphy business as a result of great strides in wireless telegraphy, and saw an opportunity to compete with the Marconi Company’s worldwide communication network by obtaining a limited license from the Danish to use the Poulsen arc technology, which was arguably superior to the spark technology used by Marconi. By the end of 1912, the company had purchased land for a transoceanic system to operate between New Jersey and Wales. . . Shortly after the system was formed, it challenged the Marconi company by placing a bid to construct wireless stations for the British Government’s Imperial Wireless Chain intended to link the empire by telegraph. Despite support by the Assistant Postmaster-General, there was strong support for the proposal put forth by the Marconi Company by other elements of the British government, and in what appeared to be a blatant conflict of interest, Marconi was awarded the contract, thus setting off what was known in the press as the “Marconi Scandal” . . . After describing Baxendale and his role in the Syndicate, the authors provide three chapters on related topics including a description of the Poulsen arc system and earlier attempts by British companies to exploit the Poulsen arc, and Marconi’s British and Overseas Engineering Syndicate (BOES). They then describe the Universal Radio Syndicate itself, covering much of the ground in the first chapter featuring Arthur Baxendale, albeit in more detail.